Speaking at ProActum OpenMeetup in Helsinki, next Tuesday (about Open Core)

I will be speaking on Tuesday at the ProActum OpenMeetup in Pub Angleterre, Helsinki. (Drinks sponsored by Novell.) The title is "Open Core - What is an open source business model and what isn't? And who cares?".

A bit unusual for this kind of meetup, but I actually summarized my talk into 3 slides, which I will share as printouts with the audience. 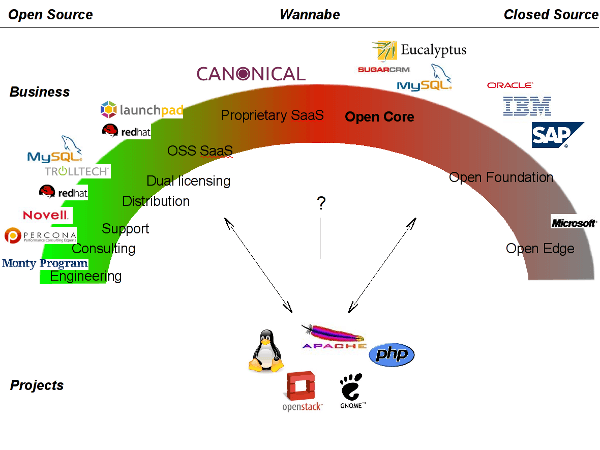 I decided to label Open Core as a "Wannabe" business model, meaning that these products want to label themselves as open source while they are not.

The issue of Proprietary SaaS services - such as Canonical's Landscape and Ubuntu One, and Red Hat Network prior to 2008 - hasn't seen as much debate and criticism as the Open Core one, but it seems that if you want to categorize it on a chart like this, there is no such but to label it as a "Wannabe" too. Even if people are not protesting as much against those services, if you really have to form an opinion, there is no way around it, they are certainly not open source.

And as usual, please refer to the 451 Group if you want to know the definitions of the various business models above. (another good post here.)

Human readable resources on Paxos
Using Math and Science to cope with Parkinson's
Is it worth exercising options early?
Sakta vi gå genom stan
On coaching and managing
A scalability model for Cassandra
Secondary indexes in Cassandra
OSI State of the Source 2020: In Defense of Extreme Copyleft
RUM Conjecture for Beginners
Database Benchmarking for Beginners
END_OF_DOCUMENT_TOKEN_TO_BE_REPLACED