MySQL and PostgreSQL faces at Froscon

My three previous blog posts I already wrote from Froscon. In this post I still want to go back and mention some people I met and discussions I had.

There were of course many MySQL people, with both SkySQL and Oracle sponsoring. It was great to meet Carsten from Oracle, who has joined the MySQL Sales Engineer team in Europe (he moved from an OpenOffice position). That's my former team, so it was great to see a new face!

Going there the person I was most looking forward to meet was Hana Hütter, formerly a MySQL account manager for Central Europe, and now doing the same at SkySQL. My first ever MySQL sales gig was with Hana, and Ralf Gebhart who is also now with SkySQL but was not at Froscon. While Ralf was there only that first time to teach me how to be a Sales Engineer, with Hana we then continued to sell MySQL into telecom companies in many European cities. I had not met Hana since I left Sun. It was really great to see again. We had lunch, I told about my experiments with Galera and she told about her customers being interested in it too. It was great to get in touch with the "frontlines" again!

She also told me a great story about MySQL adoption in Europe...

Hana told me about one of the big telco service providers in Europe. The thing that was great with Sun that we got these CTO/CIO level meetings with all the big Sun customers. So she was in a meeting with this company to sell them MySQL support. The CIO then tells her that the company uses exclusively Oracle database in production. (This was the case with surprisingly many of these companies.)

Hana then responded by acting surprised, pointing out that MySQL was downloaded quite a lot from this company's ip-addresses. A little confusion followed, after which the customer's techies explain to the CIO that actually the developers like to develop against MySQL quite a lot, and then they spend some extra effort at the end of each project to migrate to Oracle, since that was required for going into production. As a conclusion, the CIO then decided to start supporting MySQL in production too, to save the developers from such pointless work. The company then bought platinum-level MySQL support.

This was, by the way, a quite common occurence in those days and quite a few enterprise level support deals were sold after similar discussions. We at Sun had many good chuckles about it each time.

Hana now updated me that today, only 3 years later, the company has decided to standardize on MySQL as the default, and now you need to present some valid excuse if you still want to run Oracle in production! (...which is still supported, just to be clear.) Now let me remind you that this is no Pinterest we are talking about, but rather a good old European enterprise RDBMS user. With decades of history and, like most telcos, a history of being a government institution before being privatized. This is as close to legacy enterprise data centers as you can get.

Since I'm no longer on the front lines selling MySQL (in any of its brands), it was really great to hear about this progress. The database stack is pretty much the only layer that is not yet totally dominated by open source. Sure, in the internet companies it is and always was, but not in the traditional enterprise. It is great to see that we've continued to make this progress over the past 2 years. There is no reason why open source shouldn't take over the database market as well, just as Linux and JBoss and Tomcat have done in other parts of the stack.

And for all the great things Oracle has done with MySQL development, I continue to believe a crucial enabler for this progress is the availability of high quality independent support services, in this case via SkySQL. For many of my former customers in Europe, the whole point was always to have a second supplier to balance with Oracle. Thanks to MySQL being open source, they can still have that, even if Oracle acquired MySQL.

Speaking of open source databases, the 30 year old (!) open source project PostgreSQL has in the past few years also gained marketshare in terms of real, commercial database revenue. To some degree I'm sure this is just because the time is finally right, to some degree because they finally bothered to support important features like replication based high-availability and Windows, and clearly, based on talking with many in the PostgreSQL community, it has also got its share of adoption triggered by Oracle's acquisition of MySQL 3 years ago. (This is also supported by the research of 451 Group, where PostgreSQL is by far the dominating alternative for those looking for a MySQL alternative and Oracle the dominating reason to look for an alternative.)

To me, working with MySQL was always about Open Source, so I'm only happy there is also another Open Source RDBMS to choose from. Together we are stronger.

I enjoyed the company of Susanne Ebrecht (a long time MySQL support engineer, now a PostgreSQL trainer at 2nd quadrant) and Selena Denckelmann. (If you're reading this from Planet MySQL, think of these chicks as Postgres' answer to Sarah Novotny and Sheeri Kabral :-) Selena is famous for her PostgreSQL advocacy even in MySQL circles, so it was great to finally meet her. In fact, I felt very much part of the crowd when I could tell about my recent PostgreSQL experiences: at work I've been learning PostGIS and on my free time I recently wrote a 2000 line patch to a 4500 line PL/pgSQL schema! (I recently tweeted about a stealth mode open source project I'm working on, and I will keep everyone who asked in suspense for a few more days or weeks, but yeah, it uses Postgres :-)

This is the first time in 12 years I did anything with Postgres, so I suppose I can be counted into the increasing PostgreSQL adoption too! I even happened to wear the PostgreSQL t-shirt that EnterpriseDB gave me at the MySQL conference in 2011. (It's a very high quality t-shirt, comfortable when traveling.) 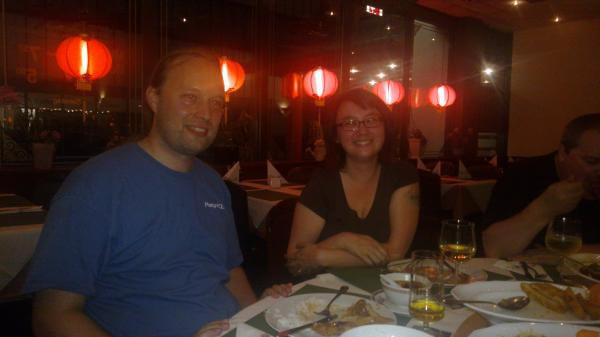 Bragging about my PostgreSQL experience to Selena Denckelmann. Susanne Ebrecht sits behind the camera.

Human readable resources on Paxos
Using Math and Science to cope with Parkinson's
Is it worth exercising options early?
Sakta vi gå genom stan
On coaching and managing
A scalability model for Cassandra
Secondary indexes in Cassandra
OSI State of the Source 2020: In Defense of Extreme Copyleft
RUM Conjecture for Beginners
Database Benchmarking for Beginners
END_OF_DOCUMENT_TOKEN_TO_BE_REPLACED