I've also come to learn the various office cultures. In Alcatel in Strasbourg everyone coming in to the office would come and shake my hand, ask how am I doing, did I watch the game last night... The one woman in the office would exchange the customary kiss on cheek with everyone and I embraced also this local custom with an open mind. Since there were about 50 people in the office space that would drip in between 9 and 10, it meant you didn't get anything productive done during your first hour.

I have blogged a lot in the past year about increasing the diversity in the community, by which I usually meant increasing the diversity in terms of more companies contributing to the development of the MySQL codebase. Under O'Reillys umbrella there's also been an active approach to increase diversity in terms of women participating in the open source communities and in particular in the conferences they organize. This is a great effort in general and in the MySQL conferences we were a couple of years even so lucky as to have the wonderful Sarah Novotny as conference chair. (She still does Oscon, the biggest open source conference on North American soil, which should tell you something about how good she is as the master of ceremonies. So we have been privileged to have her with MySQL.) Unfortunately her current career doesn't really involve MySQL and she is no longer active in the community or this conference.

So while missing some, I met several new people at this year's Percona Live MySQL Worldwide Conference. I had never met Paul Vallee (Founder of Pythian) before and it was great to sit next to him at the traditional community dinner at Pedro's restaurant. I also met the founders Sam and Alex of AccelerationDB, a new San Francisco based Remote DBA and consulting company. It was great to see both a new company (that was also a sponsor, thanks!) and new people working for said company at the conference.

It's obvious so I might as well say it. I wanted to write this blog post to show my support for Sam and her team (sorry, I never caught the names of the rest of you) and of course Alex too. I realize you are a strong woman that could take the heat, but still, the kind of behavior you had to endure - ranging from insensitive to outright online and in-person bullying - is very unfortunate and I want you to know that neither me nor many of our friends approve of the way you have been treated. (A few people come from countries and cultures where they had to admit they too may have been a bit uncomfortable with your flashy skirts, but even they rejected the bullying you received for it.)

While this is the first time I have seen this issue at the MySQL conference, I'm aware that this was not a first or isolated incident. Humans are a weird kind. I simply cannot understand so called feminists (both male and female) who take it upon themselves to have some witchunt against women that are users and contributors to open source. WTF is truly an appropriate expression...

Last year I had my family with me to the conference (as it was conveniently adjacent to Easter holidays). Possibly due to this they have followed blogs and tweets with interest this year to see familiar places and maybe a glimpse of me. At the same time I'm not online as roaming is very expensive for a European. So it happened that I actually learned about the so called "booth babe controversy" from my wife. This puzzled me a lot since I was quite sure I hadn't seen a single 19 year old model in the exhibition area, only grown up people that worked for various database companies or database-using companies. I had seen a glimpse of an orange dress, but the woman who was wearing it must have been at least close to my age. (I will not go further than that, as suggesting that a lady would be my age or more is impolite - I'm that old.)

Also, after talking to Sam for about 2 minutes - something I can recommend to anyone else eager to pass judgement in public or private - I had already learned that she is not a hired model rather she knows MySQL and MariaDB quite well. Indeed they were passionate MariaDB fans and excited to share a table with Monty, just like many other people are who meet Monty for the first time. They organize the San Francisco MariaDB user group and had various plans about contributing to MariaDB Foundation. (Which is really great as MariaDB Foundation too needs to see more diversity to get forward...) She knows about the black vodka thing. And by the way, on her mother's side she is of Finnish descent, which automatically makes her more of a MySQL insider than most of you - so suck on that my American friends!

We also discussed of some of the sad (my interpretation) conversations she had been approached by during the day. For example, it turns out Sam really likes dressing up in skirts and Loboutain high heels. She denied the conspiracy theory that her male co-founder Alex is forcing her to dress like that. I don't have any hard evidence to prove this fact either way, but in the mean time I'm going to choose to believe her.

To learn all this about her I had to actually talk to her. It wasn't immediately obvious just by staring at the size or color of her dress. (But it was a nice dress, I have to admit.) I'd like to publicly confirm that while Sam indeed has a charming smile, during the conversation I did not feel being flirted to, nor did I feel sexually aroused or in any way uncomfortable.

Without putting too many words in my wife's mouth, it's safe to say that she also defended the right of a woman to dress in a skirt and high heels if she damn well pleases. Which was helpful for me to get some confirmation. I'm a guy, so what do I know. (It's worth pointing out my wife dresses quite conservatively herself - by European standards.) I took the below picture just to show it to my wife who the people involved had been. 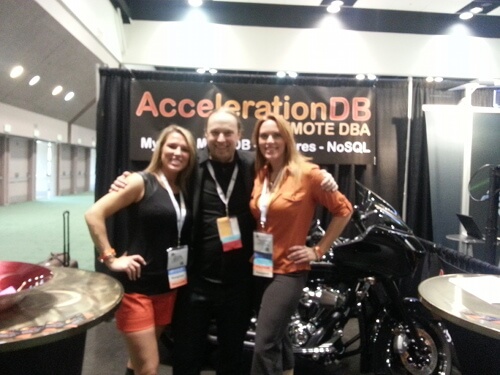 We all enjoyed and had a lot of fun taking this picture. We had to pose in this position for some time as the camera on my new Samsung apparently sucks. At no point in time did I feel the least uncomfortable nor flirted to nor did I feel aroused. This was also true at other occasions (no pictures) when I have hugged Kortney (twice), Nikki, Massimo, Ivan and Marco. It's true that when hugging Massimo I felt a bit sentimental, but that's all. (More on that in my next post.) It was great to meet old and new faces at the conference, and team AccelerationDB was certainly one of the more positive ones!

Update: Apparently I've also hugged Paul Vallee. It was nice to meet him, but not in a sexual way. After this blog post was published JJ Schmidt from Sky also hugged me and asked whether I had felt anything - but no.

I have to admit on some of the other pictures (taken another day) their skirts look on the shorter side. Since I'm quite tall I hadn't realized that from my viewpoint. To be honest I mostly look at people's faces when I talk with them.

I don't know which is sadder, other women that harrass women at the conference, or men that do it. A man commenting on how a women is dressed is just outright inappropriate. Otoh a woman doing it is just sad. Someone (a man) said: The way they were dressed made me feel uncomfortable, so I didn't go to their booth. Bingo! This is the right thing to do. When I was younger I also felt very annoyed at all the closed source vendors in the exhibition hall of an open source conference. But I didn't make a big controversy out of it, I simply don't talk with them. Next year, try it! I hope we can all do some soulsearching. I really hope people involved could grow up a little so we can do better next year and make this a really welcoming experience for everyone.

Speaking of women in the conference, I saw a really good and concise talk about various operations with MySQL replication. It was presented by a woman wearing a niqab. (The head scarf used by muslim women.) I was glad to see yet another new woman entering the scene with a solid presentation on a topic close to my own interests. And I hope to see you again in future years. (I'm on purpose not mentioning your name or tweeting any photos.)

MySQL is an international and diverse community and the whole point is that we accept everyone as they are. I wanted to remind people of that in the way I started this post. It is what we like about this community and please don't try to destroy that. It was at least encouraging to see that nobody seemed to object to the use of a Niqab. For international context - not everyone may be aware - it is nowadays forbidden to wear a niqab in several European countries (including Turkey in Europe here). The rationale behind such laws is to ban it because it is a vehicle of oppression of the women who wear them. Of course, the women themselves claim they like to wear the scarf and do not feel oppressed - but hey, what do they know, let's pass a law to fix this problem!

And just to underline my point: By European standards, I'm not quite convinced the AccelerationDB attire even qualifies as dressing provocatively.

What I'm saying is, you are all wrong. Let people wear the clothes they like to wear.

Finally, it was also encouraging that nobody seemed to disapprove of the Amish Paradise performance. After all, it was very offending to Amish people and their religion. It's good to see we still have some sense of humor left. Let's nurture that, we're gonna need it.

That's all. Thank you, and goodnight!

Human readable resources on Paxos
Using Math and Science to cope with Parkinson's
Is it worth exercising options early?
Sakta vi gå genom stan
On coaching and managing
A scalability model for Cassandra
Secondary indexes in Cassandra
OSI State of the Source 2020: In Defense of Extreme Copyleft
RUM Conjecture for Beginners
Database Benchmarking for Beginners
END_OF_DOCUMENT_TOKEN_TO_BE_REPLACED