OSI State of the Source 2020: In Defense of Extreme Copyleft 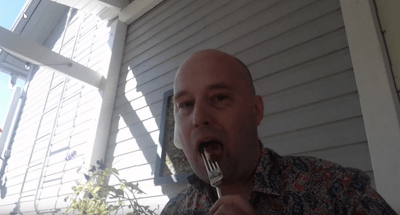 Source code without data is like coal without meat

The Open Source Initiative recently organized its first conference: State of the Source 2020. I presented a talk In Defense of Extreme Copyleft, where I explored the boundaries of current network copyleft licenses and potential need for further - carefully deliberated - expansion of copyleft licensing.

The conference of course was an online event. The OSI went for the format of pre-recorded talks. This ensures that talks are not at risk of hitting connectivity or software issues1 from the speaker's side at least, and also allows to use Content Delivery Networks rather than direct point to point streaming. But pre-recording a talk is also significantly different from a live conference talk. Below I'll reflect more on this aspect. If you are interested in my extremist views on copyleft licensing, I'll refer to the recording:

It was only a matter of time that I would speak at an online conference that would ask speakers to pre-record. In college I both studied media production and did a lot of video editing as a hobby. So an obvious question is, if I'm going to pre-record a video, why should I be content with just speaking 60 minutes into the laptop webcam? I always try to raise the bar in my talks, and if there's going to be an opportunity for video editing, I felt obligated to think about it.

Just when I was about to start preparing my State of the Source talk, I also got inspiration from this blog post by Linda Liukas who was already - of course she was - doing exactly that with pre-recorded online events. So now I had to do it! Especially the idea to substitute props for slides was inspired by Linda.

The result you can watch yourself in the video. Some reflection on how it went:

I'm old and last time I did serious video productions the goal was TV quality. Lightning, sound, cuts on average every 30 seconds... One minute of video may take 1 hour in production. That's not how the youtube generation does it anymore! It's a one man orchestra now, where I'm supposed to both perform, manage camera and microphone and Open Broadcasting System and KDEnlive... I did ask my wife to take some B-roll video with her phone. This turned out to be a life saver in the end.

All the tech I had to worry about did add a lot of cognitive overhead. I do feel like it distracted me from the actual talk.

Second, unless you are prepared to re-record a 40 minute talk several times, you really need someone monitoring your audio. I wanted to shoot outside, and a practice run was ok, but during the actual recording, bursts of wind destroyed like 50% of the audio. Luckily the audio from the mobile phone was useable. You can still see it's not 100% in sync with the video, and the level isn't as high as it should be, but you can still listen to the talk at least.

The conference was set up so that there was a live Q&A after each video. I had planned for continuity where I would be drinking out of the same soda can when they cut to the live part. I almost forgot that on the day of the conference, but luckily we did had soda cans in the fridge and I quickly got one. This gimmick was appreciated by the audience! I had also planned to wear the same clothes as in the video, but this I completely forgot. Later the same day Toby Langel did exactly this and it was again appreciated by the audience.

This format with outdoor shoot and props to illustrate the talk was appreciated by the conference audience. I'm glad I tried it out, even if I struggled a lot with the tech here. For future conferences I don't know what I will do. Is it reasonable to require a 3 person team to record a conference talk professionally? If I have to invest so much more time in one talk, does it mean I'll end up doing less conferences per year? I'll have to think about it. One thing's for sure, I'll always try to raise the bar one way or another.

Human readable resources on Paxos
Using Math and Science to cope with Parkinson's
Is it worth exercising options early?
Sakta vi gå genom stan
On coaching and managing
A scalability model for Cassandra
Secondary indexes in Cassandra
OSI State of the Source 2020: In Defense of Extreme Copyleft
RUM Conjecture for Beginners
Database Benchmarking for Beginners
END_OF_DOCUMENT_TOKEN_TO_BE_REPLACED