Christmas party at the Widenius residence

Last Friday I got to enjoy the benefit of being a MySQL'r and located in Finland: We were invited to Monty, Anna and Maria for a MySQL Christmas party. Now that we are part of Sun, the company of course organises its own official Christmas party (who organises parties on a Thursday???) like all companies do, but a special MySQL party was still a very good idea, thanks Monty for inviting us. I especially enjoyed meeting some of the MySQL'rs who had recently either left Sun or happened to be on maternity leave.

Since MySQL was and still is a distributed organization, it means that most of us don't work together day-to-day just because we live in the same country. Except for 2 of the 3 engineers we do in fact all work in different teams or departments, reporting to different managers. This also makes the parties special, there is always a lot of interesting stuff to talk about. (Some of the topics I'm sure you can imagine ;-) Like always, the program consisted of excellent food, vodka with appropriate songs and other drinks.

Since even the Finland-based MySQL team is very international, drinking songs were done in both Swedish, Finnish and Russian. (However, I realize we didn't sing anything in French, we need to do something about that!) One funny Swedish song is based on a Russian original, it says I want to drink vodka, eat kaviar, make love to a Russian woman, and throw up in a samovar. The native Russians (while still laughing) thought this was a horrible text, and preferred to sing us the original Russian one instead. The explanation of the original Russian lyrics was that it is about a pirate captain who falls in love with a Turkish princess. The captains men then start to doubt whether they can still trust on the captain's loyalty, so to prove himself the captain sacrifices the princess and throws her into the sea! Frankly, I'm not sure I agree with our lyrics being the more horrible ones. 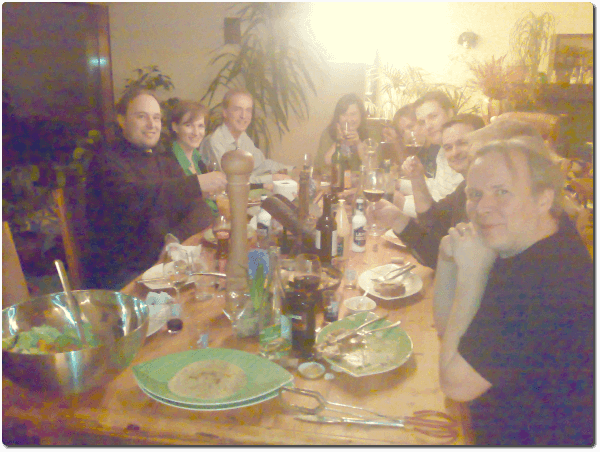 In the above picture we are toasting a bottle of Vina Monty of 1985. (I believe that is the oldest wine I ever tasted, actually!) Mr Backman asked for some history, and we learned that in 1985 MySQL was about 15% ready compared to its first public release, it was at that time that Monty had just ported the original BASIC code of the ISAM engine into C (or C++?).

Oh, and I just have to point it out: Do you notice there are 5 MySQL employees on the right hand side, and 1 on the left hand side! Coincidence? Maybe, maybe not... (Yes, this is a lame attempt at expensing my taxi receipt as a MySQL 5.1 release party expense.) It should be added that Camilla Zilliacus, who used to pay our salaries and just generally take very good care of us in MySQL Finland is taking this picture, and Anna, sitting on neither side of the table in the middle, is also counted as MySQL alumni of course, and the remaining people are spouses.

Using Math and Science to cope with Parkinson's
Is it worth exercising options early?
Sakta vi gå genom stan
On coaching and managing
A scalability model for Cassandra
Secondary indexes in Cassandra
OSI State of the Source 2020: In Defense of Extreme Copyleft
RUM Conjecture for Beginners
Database Benchmarking for Beginners
Dear Julie
END_OF_DOCUMENT_TOKEN_TO_BE_REPLACED