How delegated voting works, and how to extend it for secret voting

So yesterday I went live with my new project, Solon, which aims to implement cryptographically secure e-voting for delegated democracy platforms, starting with Liquid Feedback.

To create a cryptographic algorithm for Liquid Feedback, we must start with understanding how the current (plaintext) voting works in Liquid Feedback. The concept is known as delegated voting. 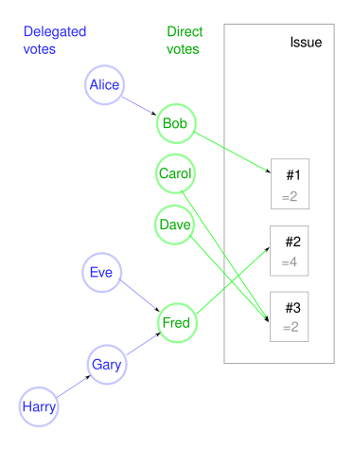 In the above graph Alice, Bob and their well known friends vote on an issue where 3 competing initiatives have been proposed. They use delegated voting. (Note that while Liquid Feedback uses a fairly complex preferential voting method, in this example we keep it simple and each of them only votes on a single initiative, also known as 1-out-of-n voting.)

The last point really underlines the power of delegated democracy.

First, delegating by unit is very similar to how you vote for a single politician to represent you in parliament, with the difference that you can change your decision at any time, not just every 4 years. Delegating by area is a further refinement: There really isn't a valid reason why I should only be allowed to choose only one person to represent me for everything.

As an example, imagine a Finnish voter who's political alignment is as follows:

There doesn't exist a single party in Finland that would share all those political views. So you have to vote for someone who will only represent your views on some topics but not all - or just give up and not vote at all. But when you can delegate your vote per topic, then you can choose the best fit for all three topics!

Finally, delegating per issue could be used if you want to override your normal delegation just for this single time. Of course, then you could also choose to become a direct voter for that issue.

There is a demo instance of Liquid Feedback that you can sign up for if you want to play with delegated voting hands on. (The system decides on policy issues for the Solar System :-)

Let's now extend this system so that we can use a cryptographically secure voting method. This implies that everyone’s vote is secret. But that is then a problem for the delegation mechanism - how can we delegate a vote, or count that vote, when we don't know how anyone voted?

The answer is to split voting into two parts: everyone has a public vote and a private (aka secret) vote.

UPDATE: It is worth pointing out that in addition to being a technical necessity, the split into public and private votes is considered a feature in itself. It mirrors how we vote in modern elections too: In an election, my vote is secret. But the politician who represents me in parliament does his work, including the voting, in public. This is so that I can hold him accountable and know how he has used my voting powers, that I had delegated to him.

In the liquid_feedback_patch/ I've done for the Solon project, the public votes are simply the same voting mechanism that is already used by Liquid Feedback. But while they are stored in the database as before, there is a stop at the moment counting happens - they are not counted as part of the voting result. Instead they are only used for lookups to determine the results for delegated votes. The private votes otoh are stored against an external system. (...which is yet to be implemented, but you can play with a mockup user interface.) This external system caculates the result of the voting and then stores it back into Liquid Feedback. (The Schulze ranking is then applied as usual, there's no cryptography needed for that part.)

The voting method used (ie how votes are counted and a winner determined) affects people's voting behaviour greatly. For instance in Anglo-American countries a winner-takes-all system is often used and this effectively leads to a two party system. For instance in the US presidential elections there is no point in voting for the Green candidate, because he can't win anyway so it's the same as not voting at all. (...which is exactly what many people choose to do in these countries, they usually have much lower voter turnout.) In other countries other voting methods are used (Finland uses d'Hondt system) but the same problem persists to a lesser degree.

To make a delegated democracy system as fair and inclusive as possible, it should use some modern preferential voting method instead of the traditional methods we are used to. Liquid Feedback uses the Schulze ranking method. (What a coincidence, it's creator is German too!)

In the above pictures we simply voted for one of the available alternatives. In a preferential voting system the voters will instead make an ordered list of the alternatives: "I prefer #3 the most, then #1 and I like #2 the least."

I should note that in Liquid Feedback: a) it is also possible to list two alternatives as equally preferred, and b) they always include one alternative as "Status quo", which just means "I prefer we do nothing over the alternatives that are lower than this in my list". The first detail just makes the amount of possible permutations larger, and the status quo alternative can be handled as just another alternative, there's really nothing special about it in this context.

Unfortunately most, if not all, cryptographically secure e-voting systems have been created with traditional elections in mind. So they may not be suitable for preferential voting.

One way to use such algorithms for preferential voting methods would be simply to map all possible permutations of this ordered list to a value that the user could vote for. Ie if you want to vote for the list "#3 #2 #1" then vote "1", if you want to vote for "#3 #1 #2" then vote "2", etc... Unfortunately if there are many initiatives this mapping will quickly grow very long and it would make the cryptographic computations more expensive. As noted, the fact that Liquid Feedback also allows initiatives to be ranked as equals also increases the amount of permutations needed.

The Acquisti algorithm provides for a way to enable write-in votes in section 5.2. I believe it can also be used to enable the algorithm to be used for preferential voting. This way it is possible to create a mapping for the preference-lists that voters actually want to vote on, without having to create a mapping for all possible permutations, most of which nobody is going to vote for.

Human readable resources on Paxos
Using Math and Science to cope with Parkinson's
Is it worth exercising options early?
Sakta vi gå genom stan
On coaching and managing
A scalability model for Cassandra
Secondary indexes in Cassandra
OSI State of the Source 2020: In Defense of Extreme Copyleft
RUM Conjecture for Beginners
Database Benchmarking for Beginners
END_OF_DOCUMENT_TOKEN_TO_BE_REPLACED