It was my fault

Last Friday noonish, I was back at PDX. I had decided to invest in the Thursday night parties - to strengthen those bonds of friendship that are the backbone of the open source community - then sleep, pack and take the light rail to the airport in the morning, skipping the remaining Friday morning conference sessions. I had already been at the convention center 6 days in a row, figured it would be enough for now.

When checking in for my Delta flight, the kiosk printed me 2 boarding passes for AMS-HEL, but none for PDX-AMS. (For the next hour I would be wondering whether this was a software glitch or because I was checking in late, but today I've read about Mark Atwood having a similar experience checking in with Delta, so it sounds like I actually did arrive in time and it was just a bug.) Trying to check my luggage didn't work, since computer couldn't find me on the flight. So I was sent to another clerk that could help me, that sent me to a third clerk that could help.

After waiting in line for the special assistance clerk, it was already too late to check in to my flight. PDX is a small airport (just like HEL) and there wasn't any line at the security check. So I could have been at the gate in like 5 minutes. But they have a hard cut off 60 minutes before the flight departs. There was nothing to be done, the clerk said. To underline the fact that things weren't going in my favor, she asked me to wait some more while she tended to other passengers who still could get to their flights!

Finally she started looking at my boarding passes, computer screen, and calling the help desk to see what could be done. After a holding the line for minutes, she thanked me for being so patient.

Me: Oh, it's my fault for not coming earlier. I responded.

With this, the lady who had already been very professional and kind, completely melted:

Ooh, thank you so much for saying that. Thank you. Usually people just yell at me when this happens.

Even if it was a possibility that I had arrived too late, she was all the time working on the assumption it was a problem with the Delta software systems we were trying to fix - which later turned out to be true. In other words, good customer service all the way, regardless of who's fault it really was.

And even if it eventually turned out to be a software problem that prevented me from boarding my flight, let's face it: it was true. I could easily have arrived at the airport two or three hours earlier if I had just bothered to leave the hotel earlier. PDX has free internet, I could have written those emails there. After all, had I been there just 10 minutes earlier, it would probably have been enough to sort out the missing boarding pass. Better yet, had I checked in first instead of going to the restroom, that would probably have been enough time already!

She continued to talk to the helpdesk. I pointed out that I had like a 5 hour layover in AMS, so if they could just find an alternative connection, maybe I even could reach my original connection from there?

She: Let's see what we can do. Thank you for being so patient. Usually we can do a lot to help you, when you are being nice to us.

In the end it did work out, much to my amazement. I got a new route via Minneapolis, that would arrive in Amsterdam an hour before my connecting flight home. Now it was my turn to thank her, this was absolutely amazing!

As an extra sign of her gratitude, she checked me into the seat by the emergency exits, which have more leg room. I actually don't really care about those, but I'm aware this is considered one of the biggest perks you can get. Yeah, I live a sad life of a business traveler... So I appreciated the gesture. 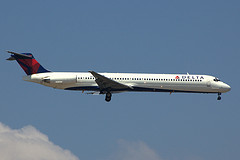 People near and dear to me often think of me as that annoying person who thinks he is never wrong about anything. Since I'm a nerdy engineer, I'd really like to be that person! But the unfortunate reality is that I am sometimes wrong.

But I have a secret trick! When I'm wrong, I try to admit it as quickly as possible, and apologize if necessary. This has the effect of minimizing the duration of being wrong, so to many people it kind of looks like I'm (almost) never wrong.

Apologizing and admitting you're wrong is great. Sometimes, even if technically I had done nothing wrong, I've apologized just for good measure. It always works out in my favor and I end up looking like the good guy. And I feel good doing it!

After major conferences like Oscon, I usually summarize what I've learned in a blog post or two. (At Nokia it was a requirement for getting the travel request approved.) I might still do that - there are fying robots to talk about - but this experience at the airport is probably the most important lesson to all of us.

Human readable resources on Paxos
Using Math and Science to cope with Parkinson's
Is it worth exercising options early?
Sakta vi gå genom stan
On coaching and managing
A scalability model for Cassandra
Secondary indexes in Cassandra
OSI State of the Source 2020: In Defense of Extreme Copyleft
RUM Conjecture for Beginners
Database Benchmarking for Beginners
END_OF_DOCUMENT_TOKEN_TO_BE_REPLACED