Enjoying yet another Kubuntu laptop

Conveniently for the start of my holiday we received a new HP nx7400 from LinuxComp.net. Outside the US it is still impossible to by those Ubuntu Dell laptops, so this one comes with Windows XP forced upon me, BUT it also comes with Kubuntu 7.04 out of the box, courtesy of the great service by LinuxComp's Jukka Hellen!!! (As you might remember, there is already one LinuxComp Kubuntu laptop in the family, so we already knew we would be satisfied with Jukka's services.)

The laptop is actually for my wife. It will replace a big old AT tower and CRT monitor in our living room. So getting the laptop is as much a technology upgrade as it is a furnishing issue :-)

You might be amused by the Linux vs Windows statistics in my family now: My brother will start using Linux since he got a job as a teacher in a school that uses Ubuntu systems. (From Opinsys I believe.) As of last Christmas, Dad is using Linux exclusively. Also Mom is nowadays, although she hadn't really realised it :-) Of course my wife has been using Linux since ages.

BTW funny incident happened at her work recently. There is a guy there who is commonly seen as the unofficial tech-geek/computer support person. One of the ladies came to ask this guy about whether it is ok to copy music CD's and what about those DRM's? He quite correctly answered that it is ok to copy CD's for personal use, except in Finland it may or may not be illegal to copy CD's which happen to have some kind of DRM on them. He also correctly informed her that in any case those DRM technologies won't stop her from copying CD's, they just might make it more difficult (or not). To which my wife added that if you can get access to a Linux computer you could just copy whatever CD's and won't even notice the DRM's, at least she never had any problems. I'm so proud!

Anyway, back to the main story. So is anyone still using Windows? The dirty little secret is... I am :-/ I have a laptop from work, and the IT department only supports Windows. Of course I have access to (my wife's) Linux computer at home, but the truth is I use my own laptop for most of my private gmail/surfing/openoffice tasks. I do hope this situation will change during the next 6 months though, I'll let you know :-)

So anyway, what about Kubuntu? IT IS GREAT! Of course the Linux+KDE experience has been the best for many years now. Also things like installing windows codecs and flash players are as easy on Kubuntu as they where on Mandrake in its' hey day. Isn't it ironic that installing even proprietary software is easier on Linux than it is on Windows :-)

The Adept manager that Kubuntu uses to install and update software is worth A+. I'm so glad that after 10 years there finally is a good GUI frontend for apt. So there you go, great Free Software in the thousands is right there at your fingertips! 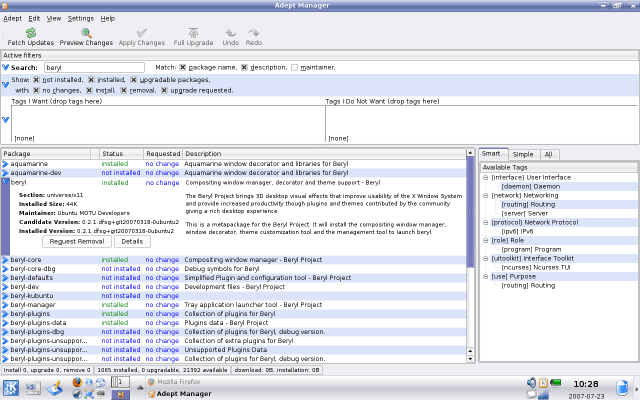 I also had some fun with the compiz and beryl 3D desktop effects (spent a day or so :-) but to my own surprise I eventually didn't leave either of them on. I guess these projects are still in an exploratory phase, where they create lot's of cool effects, but it will take a time to settle on a setup that actually enhances usability. For instance I never got the cube thing. It is cool alright, but I have never used the metaphor of my virtual desktops being sides of a cube. (Ok, so the inside cube has a point.) They look great though. I liked the Beam Up, Magic Lamp and Fire animations the best.

Also the System settings application is simply the best Linux configuration tool I've ever used. Kubuntu is doing a great job in enhancing the traditional KDE user experience - which I have to admit could be a bit overwhelming - and on the other hand extending the desktop configuration aspect to some crucial administrator tasks too, like services or samba configuration. This way all of you Average Joe configuration tasks are found in the same place, following the same logic in user interface and workflow.

By the way, although it doesn't show on the image, now they also got the OK-Cancel buttons right :-)

The first thing to do is of course to change the default wallpapers. I was delighted to see that the task of fetching new ones from KDE-Look.org is seamlessly integrated and ended up using wallpapers from there. It is also great that the wallpaper tool has the capability to apply some basic imaging effects by itself, as many photos that are nice by themselves, often need to be tinted to some color to make a more soothing background. 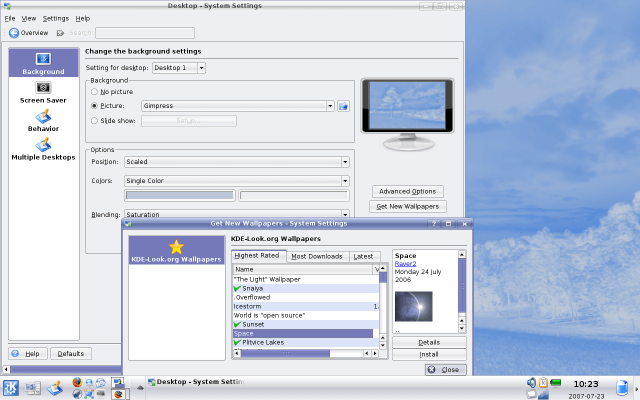 One architectural miss is that KNetworkManager somehow sees itself as a per-user configuration tool. So after I've configured WiFi for myself, my wife still couldn't use it from her user account but had to do the configuration all over again. This is clearly a problem and if I remember correctly, you may get interesting results if you have more than one user logged in simultaneously, which of course is perfectly possible.

But still, KNetworkManager is a great step forward and the remaining issues are more like cleaning up the old mess. 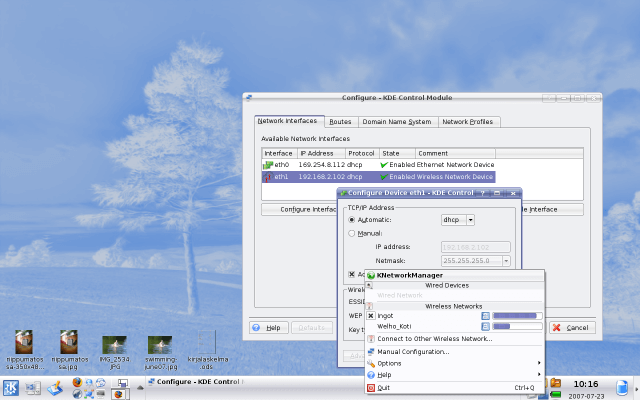 One final issue I noticed is that Printer configuration could be more automated than it is now. You would expect that plugging in a USB cable from the printer would automatically open up a dialog which autoconfigurates everything, but at least for me nothing happened. (Just for comparison, plugging in a USB mouse makes the mouse instantly usable, no configuration needed.) Adding the printer from System settings is easy enough and KDE should again be praised for providing us with the best CUPS configuration utility since many years.

Configuring the printer reminded me that there is a flaw in the default settings of my HP Deskjet 845C. By default it can only print black and white OR color (producing black as a dark gray mixture of all colors) even though the printer is fully capable of using colors and black at the same time, which produces much better results. Maybe I should be a good citizen and report this as a bug somewhere to finally get it fixed after 7 years. 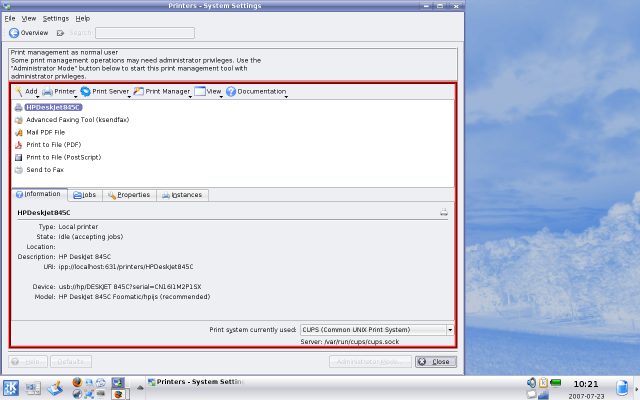 So, now it is time for some other vacationy tasks of today:

Human readable resources on Paxos
Using Math and Science to cope with Parkinson's
Is it worth exercising options early?
Sakta vi gå genom stan
On coaching and managing
A scalability model for Cassandra
Secondary indexes in Cassandra
OSI State of the Source 2020: In Defense of Extreme Copyleft
RUM Conjecture for Beginners
Database Benchmarking for Beginners
END_OF_DOCUMENT_TOKEN_TO_BE_REPLACED