To and at the MySQL Staff Meeting, Orlando FL 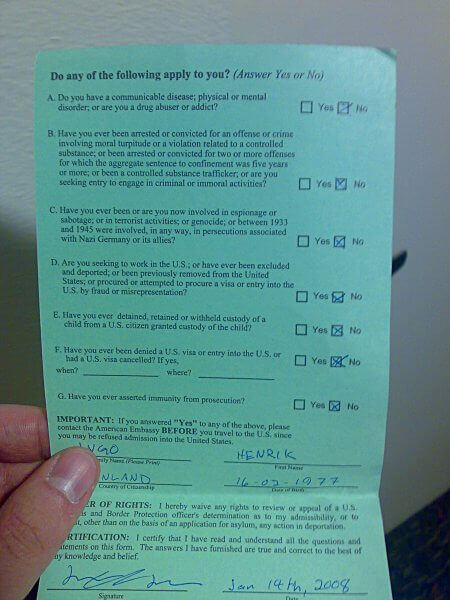 So I managed to answer all those questions correctly and the US Border Control officer kindly let us into the country. It was easy since the questions were the same as the last time I visited the US in 2000. Filling this sheet is always a fun time, it makes me wonder wanna know wether there exist any statistics on how many terrorists and drug trafficants get caught by accidentally filling in the wrong box :-) Then of course there are some tricky questions, what if you are traveling to the US to engange in immoral but legal activities. From what I know sitting naked in the sauna would already be suspicious here ;-D

So my first day as a MySQL was pretty much taking an early plane from Helsinki to Amsterdam, finishing my nights sleep on a wooden bench, waking up relaxed and energised, then sitting another 10 hours for the Trans-Atlantic flight. I had uploaded a lot of MySQL whitepapers and documentation on my laptop and also E90 Communicator, so on the plane I killed time by reading up on the MySQL Cluster, which I will be working with mostly.

On the plane I already met one other MySQL'r, Erik Granström, who happened to sit close to me. He is an old friend of the founders Monty, David and Allan and one of the earliest (about eleventh) employee of MySQL. Chatting with him gave me insights into what it is like working for this global company with a distributed workforce working mostly from home. He especially mentioned how nice it is to be home with the kids. I'm sure I'll enjoy it just like Erik. He also told some interesting stories of the early days of traveling with Monty and David in San Fransisco looking for investors and Monty (then CEO) being very tight with the spendings and looking for the absolutely cheapest hotel in SF. I won't tell more about that story here :-)

Eventually I've arrived at the Dolphin and Swan Resort Hotel, a very nice hotel in the middle of Disneyworld. Unfortunately my roommate seems to not have arrived, I heard people in his country had visa problems and couldn't travel. Guess I shouldn't joke about the visa thing anymore then... Many other MySQL'rs have been arriving though. It is exciting to be here and I'm convinced I will be enjoying working for one of the worlds absolutely top Open Source companies.

Today has been all about new hire introduction program, introducing the company. And also since everybody is here, all of the executive team has been speaking to us in turns.

We were wondering if there was a common theme in everything that the executives said, and concluded that surprisingly "we are a crazy company". Hopefully not that crazy, but the idea is that being a disruptor and doing things differently is the big theme at MySQL. For instance, I have to say I admire what supposedly is an official travel expense policy dictated by Mårten: If you managed to make a good deal on the flight tickets, treat yourself to a nicer meal on arrival.

Anyway, I'll now return to the program going on here. Tonight there is a welcome party where hundreds of employees will gather and there are rumours MÃ¥rten will be singing. By the way, in real life he looks awfully lot like this other Finnish singer (Jari Sillanpää).

I also felt it was really tricky to fill up the form during my last stay in the US. I could not stop wondering whether it was a fine English-humorously ironic joke based on some Monty Python sketch (in which case you should definitely answer yes) or if US bureaucracy was really that naively out-of-date. It was particularly hard with the part where it is asking about having been involved with Nazi Germany or its allies! But then I heard stories of people who had been denied a US entry for the most dumb reason, so better not play around with the border guards!

Human readable resources on Paxos
Using Math and Science to cope with Parkinson's
Is it worth exercising options early?
Sakta vi gå genom stan
On coaching and managing
A scalability model for Cassandra
Secondary indexes in Cassandra
OSI State of the Source 2020: In Defense of Extreme Copyleft
RUM Conjecture for Beginners
Database Benchmarking for Beginners
END_OF_DOCUMENT_TOKEN_TO_BE_REPLACED