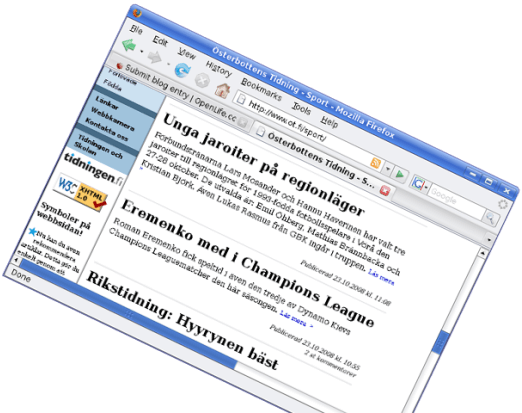 I visited the London installment of our MySQL European Customer conference on Thursday. In a lecture hall of 250+ attendees I found an empty seat next to a man who turned out to be Patrik Pada who is the webmaster of HSS Media. Tick, tick, tick... [sound in my head thinking there is something familiar here...]

Oh yes, that is the company that publishes Österbottens Tidning (née Jakobstads Tidning) and Pietarsaaren Sanomat, both the local newspapers (in Swedish and Finnish, respectively) for the town I was born and raised in. The world is indeed small, Patrik concluded. I on the other hand wanted to thank him personally, since as an emigrated Jeppis-bo I rely especially on the web editions of those newspapers. I still follow up especially on my football team Jaro, for instance, and JT ÖT is also a good source to follow the careers of both Eremenko brothers, who also were raised in this town. And I trust those reporters to have the inside scoops when new player contracts are rumoured.

The HSS Media web servers run MySQL to serve their content. They started out using the free version. Then on the day of the Jokela school shootings the site went down due to all the traffic. (Which is odd at first thought, since Jokela is nowhere near these newspapers, but it is good to remember for the Swedish speaking population these papers often serve as primary news source for any Finland news.) So HSS Media decided that'd better remain the first and last time their site went down, bought new hardware and signed up for the MySQL subscription - among other to benefit from the monitoring tools. Indeed, now with the Kauhajoki school shooting some months ago, the site could bear the traffic which peaked at much higher than at the Jokela news. (Kauhajoki is closer to this area.)

I felt weird inside listening to this. I know that often our customers come to us exactly like this, starting out as free users and signing up for subscriptions when they first get into trouble. But this was perhaps darker than usual, that the background to their decision to become MySQL customers lay in the first ever school massacre in Finland, whereas the benchmark which validated that decision (making them happy customers?) was the second massacre. I didn't know what to think, but Patrik just explained that this is what it is like in media, the worse the news, the more traffic the site receives.

I guess the grim story tells more about the realities of the media industry than the database industry, after all.

But, it was nice to meet you Patrik, and make sure especially the good Jaro reporting continues to be 99,999% available on the site!

Using Math and Science to cope with Parkinson's
Is it worth exercising options early?
Sakta vi gå genom stan
On coaching and managing
A scalability model for Cassandra
Secondary indexes in Cassandra
OSI State of the Source 2020: In Defense of Extreme Copyleft
RUM Conjecture for Beginners
Database Benchmarking for Beginners
Dear Julie
END_OF_DOCUMENT_TOKEN_TO_BE_REPLACED