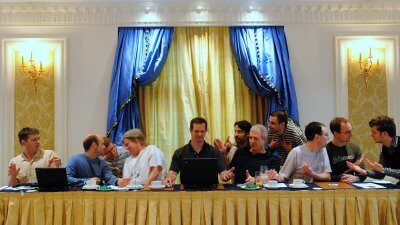 I'm close to being convinced that Oracle wanted to buy MySQL to kill the product, but knew that it couldn't pull off the stunt itself. It would be too obvious, especially to European Union regulators. So it sent in a stooge to do the job.

The two companies, Sun and Oracle, have been strategic partners for years. On top of that, Sun cannot actually afford to spend a $1 billion on a company producing a mere $60 million in revenue and working outside its core competencies.

So who can afford it? Oracle, that's who. This deal stinks from top to bottom.

I'm all for conspiracy theories, but can't say I would have agreed with that one a year ago. When a prediction is right, it's right, well done Mr Dvorak.

My collague offered a transcription of how it actually happened:

Scott: Larry, we are fucked, why you don't buy us?
Larry: shit, you are too expensive!
Scott: What can I do to convince you,? please!
Larry: mmmhh... add MySQL to the package

Personally, I finished of the MySQL User Conference by driving to the beach. This was the first time that I saw the Pacific Ocean, so of course I had to take a dip: 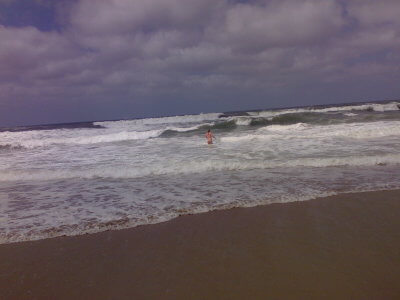 It was an amazing experience to be grabbed by those big waves. The Atlantic waves are nothing in comparison.

Ending a crazy week standing in the waves of the Pacific, reminded me of a movie Le Grand Bleu I once saw.

It tells the story of a free diving champion, who feels happy when diving deep into the sea, yet has issues with his life on land. The movie ends with his final dive, when a dolphin he has befriended comes to meet him at the bottom of his dive, and instead of turning and going back up, he lets go of the rope and joins his friend the dolphin instead.

Nono, I did not kill myself, I'm here writing this blog aren't I. And while that's probably what happens if you dive really deep and decide to stay there, that's not really how the movie depicts the diver either. In the movie he is not really committing suicide, rather he is just following his strong urge to swim freely in the ocean, with his dolphin friend. I could understand him right there.

Using Math and Science to cope with Parkinson's
Is it worth exercising options early?
Sakta vi gå genom stan
On coaching and managing
A scalability model for Cassandra
Secondary indexes in Cassandra
OSI State of the Source 2020: In Defense of Extreme Copyleft
RUM Conjecture for Beginners
Database Benchmarking for Beginners
Dear Julie
END_OF_DOCUMENT_TOKEN_TO_BE_REPLACED