If you're selling to your community... you've got it backwards.

My ongoing dialogue with Matthew Aslett inspired me to read more of his recent writings. An excellent piece Do not sell anything to your community is based on a blog post by Stephen Walli.

Inspired by Stephen, I also looked into a set of slides I recently created and will try that style for this post...

the conversion of community users into paying customers has long been a concern for open source-related vendors. It has also long been a source of friction, with vendors that offer proprietary extensions being accused of “bait and switch” or otherwise undermining the value of the open source software in an attempt compel community users into becoming paying customers. In recent years the next generation of start-ups has learned that the best way to encourage a frictionless relationship between a vendor and its community is not to attempt to “convert” users at all.

Stephen refer's to a useful concept by Mårten Mickos:

...that the early community has time but no money while the later community has money but no time, and that his customers are in the latter bucket. This is the start of a better model for understanding community and customer. Let's use the "time is money" line as the division between community and customers because by forcing the separation of the two groups we can add clarity to both and the things a business would need to do differently with each.

I agree with all of the above.

Ironically, while Mårten came up with the slogan about time vs money, at MySQL everyone was still mostly pre-occupied with the question how we could convert more of the community to paying customers, contrary to what Stephen concludes the slogan adviced us.

I recently created some slides to educate some former MySQL managers who have now gone on to other open source ventures. I caught one of them with his pants down still using the phrase "Community strategy" to refer to what was essentially lead generation, not at all the stuff Jono wrote a book about. It bothered me that after so many years working for a leading open source company, they still had no clue what an open source community even is, so when given an opportunity to educate them, I created these slides.

If you never worked for MySQL AB, the below diagram is easier to understand if I first explain that at MySQL "community member" was commonly used as euphemism for "not employed by us". This leads to the paradoxical conclusion that most MySQL code was not created by the MySQL community! The other usage refered to "Community Users", or "Users of Community Edition", in other words users who are not customers, which has the unintended consequence of excluding big MySQL users like Facebook from the MySQL community. 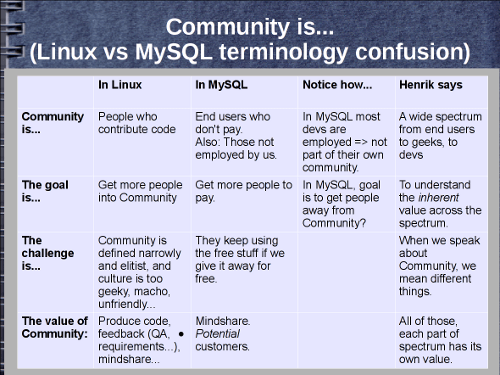 The "spectrum" referred to was developed in an earlier slide. It looks like this: 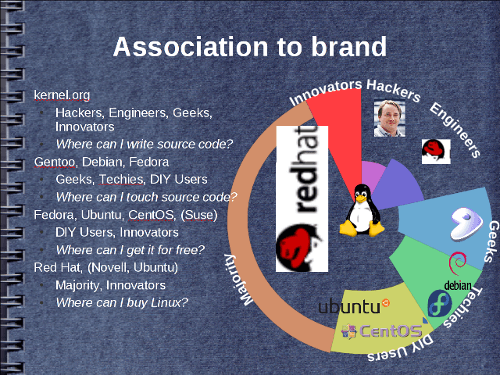 The point of the spectrum is that this MySQL manager's horizon started at the people who use the product for free to spend time and save money, and thus misses the whole right half of the pie which you normally would see as the most interesting part of an open source community. Needless to say, it is generally agreed that MySQL more or less failed to develop that community. (Stephen gives a great clue, ask yourself: "What do you want them to do?")

The terms Majority and Innovators are borrowed from the Technology Adoption Lifecycle curve. The Early Adopter seems to correlate mostly with the "Techies" slice.

Human readable resources on Paxos
Using Math and Science to cope with Parkinson's
Is it worth exercising options early?
Sakta vi gå genom stan
On coaching and managing
A scalability model for Cassandra
Secondary indexes in Cassandra
OSI State of the Source 2020: In Defense of Extreme Copyleft
RUM Conjecture for Beginners
Database Benchmarking for Beginners
END_OF_DOCUMENT_TOKEN_TO_BE_REPLACED