A new Ingo was released unto the world December 11th, 2007 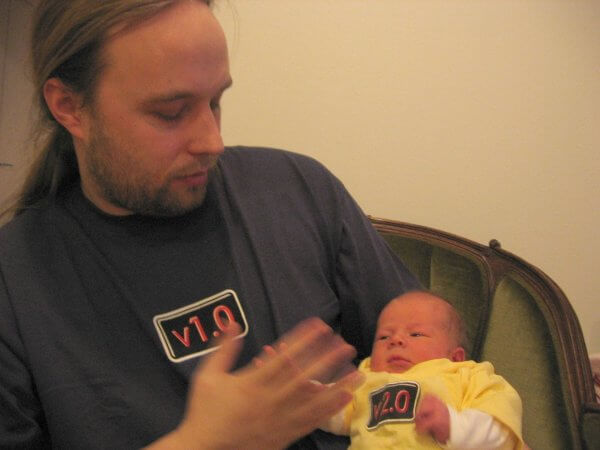 Dear friends. I'm proud to announce that on December 11th I could witness the miracle of birth and becoming a father to a healthy 3850 gram boy. Already on his birthday he had hair long enough to make a small pony tail - thus completing a line of three generations of ponytails for the Ingo men! Some days after his birth we also shot this picture, with the infamous ThinkGeek.com t-shirts.

In the part about business models, Open Life contains a chapter titled Glass House, a totally transparent company (fictitious). As the title already gives away, it is my fictitious vision - a utopia, if you will - of a radically open business model, where even the tendering process and financials of the company would be publicly available.

The New Inspirer reports on a business model not at all like that, but this was really inspiring to read:

Entrepreneur Sanne Roemen never makes an invoice. She lets her clients decide what they want to pay her. And how they want to pay her. Sanne, who consults on how companies can apply web 2.0 principles in their business, knows by experience by now that clients generally pay her three times as much as she would have offered before the job was done. The side-effect of clients paying less than expected therefore isn't too much of a problem. 2I can't determine for the client what the value of my services is. That's something which is different for everybody".

The server that among many other things was hosting the avoinelama.fi domain crashed last Saturday. My main private email is henrik.ingo [at] avoinelama.fi, so for many days I did not receive any mails.

Blog from the Nottingham seminar

First day of the Peer production seminar in Nottingham university is over (though I'm posting this the next morning). I have to say it exceeded my expectations, so I'm really glad I was able to attend. There are several characters with a strong Free Software background here mingling with academics who are sociologists or whatnot. It creates a good mix of people on the one hand being able to give very concrete examples of how Free Software projects do stuff and on the other hand the academic minded people being very intelligent about analysing and generalising the concepts in action.

Andreas Wittel and Michael Bauwens introduced the day. Michael clearly has been thinking about this stuff for a long time, most things that we end up talking about he is already aware of and can immediately give very detailed insigths to them.

Direct Democracy - My presentation in Nottingham

Heyhey... after a year of hard office work, it's like the good old times again: my blog seems to contain mostly notes of various conferences I've been to :-) (By the way, I also had an interesting trip to Dublin last week, maybe I'll write about that later.)

On Wednesday night I'm off to Notthingam, where I'm attending a seminar titled "The political economy of peer production" organised by the Nottingham Trent University. Excited as I am I became a bit grandiose and chose as my subject the introduction of a system of direct democracy. In other words, I've been thinking I should replace all the current democratic governments we have.

Public apologies and/or excuses from the SCO fanboys

Years ago a company called SCO filed a lawsuit againt IBM for "stealing" code from "their" Unix and placing it into Linux. It was big news then, but most people haven't cared for years. Of course all of this was just a sham of the SCO management. It's been shown for some time that actually nobody stole anything for Linux, and in any case SCO didn't even own Unix in the first place. Recently SCO finally filed for bankruptcy, putting at least some kind of end to their misery.

Steven Weber: The Success of Open Source and the stew in the magic pot

Human readable resources on Paxos
Using Math and Science to cope with Parkinson's
Is it worth exercising options early?
Sakta vi gå genom stan
On coaching and managing
A scalability model for Cassandra
Secondary indexes in Cassandra
OSI State of the Source 2020: In Defense of Extreme Copyleft
RUM Conjecture for Beginners
Database Benchmarking for Beginners
END_OF_DOCUMENT_TOKEN_TO_BE_REPLACED